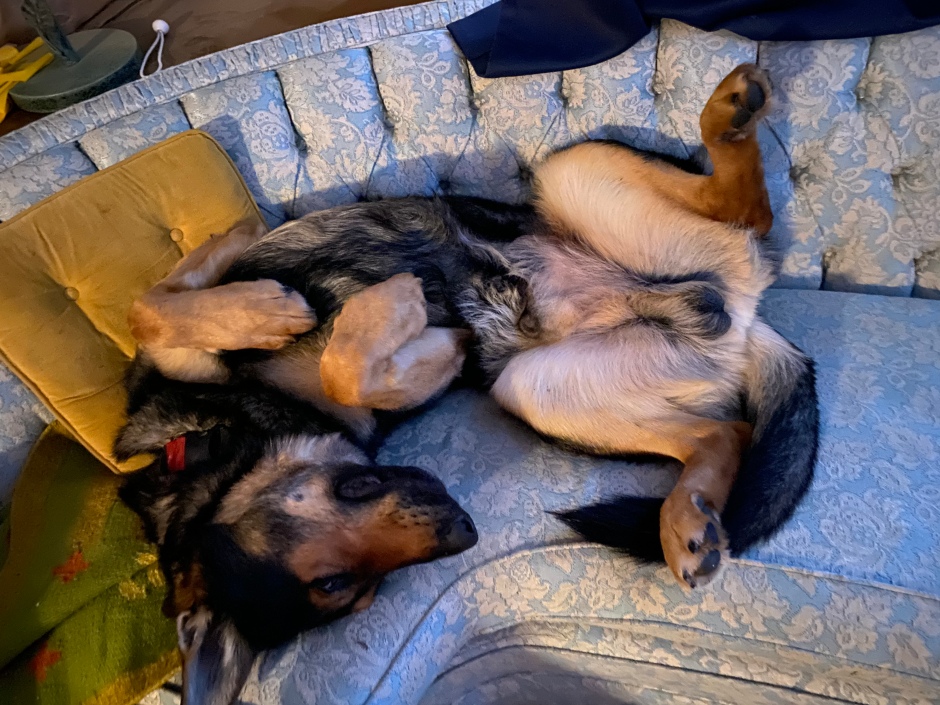 I’m going to do it. Actually (remembering my childhood, where our family actually gelded our own pony, and it was common in those days to do that, maybe it still is, with elastic bands) I’m not going to do it, but my veterinarian is going to do it. She’s also going to do a gastropexy while she is at it, hopefully protecting him from torsion/bloat risk.

It’s hard to decide to neuter a dog. With Tigerlily, I waited til she was 3 years old. She was a rare breed (barbet) and in spite of how shy and prey driven she was, how she was really smaller than her siblings, I held onto that dumb desire to maybe breed her til she was three years old. She had a pretty miserable spaying procedure. Poor Tiger. I slept with her, holding a hot water bottle on her incision that night, and that helped. I wished I had spayed her earlier. Surgery doesn’t get easier as they get older.

M’Ocean is 3 years old too now. I am getting him neutered because I am realizing, I never want to breed him. I guess it takes me 3 years to realize that. Too many people use shock/prong/choke on these dogs and I don’t have a long list of people I would trust who want a GSD puppy. Also, a shock collar to teach him to avoid sexy coyotes seems like a worse training plan than neutering. As Denise Fenzi said, “If someone told me I could never eat another meal again, and there was a way to get rid of my craving for food, it seems like a no-brainer.”

M’Ocean is fully mature. 94 lbs. He’s basically a very confident assertive funny and friendly dog. I hate to do invasive things, but being a dog owner is invasive. Leash walking is invasive. The dog/human symbiotic relationship is as invasive as the hills. That dog has already left the doghouse. We’ve domesticated and changed dogs and we continue to do that.

It’s weird. Weird to have dogs who really feel like they are part of the family. My dogs feel like they are humans, kinda. They seem to believe I am their mom, or their Guru. They worship me, kinda. They aren’t looking to start another family. Well… my spayed older dog Bee is DEFINITELY not looking to start another family, but if I let M’Ocean spend a few days out in the woods this week, especially if I left bowls of food, probably he would go start another family, unless the male coyotes killed him first. But he’s living a good life amongst the humans, and in general he seems satisfied and well adapted to this domesticated dog arrangement.

I’ll let you know how it goes, and if neutering him changes anything in our lives, in good or bad ways. It’s going to cost me maybe $1000.00 which is just one more aspect of the ordeal. I really don’t like doing it, but after thinking it through, our risk versus benefit analysis, neutering him feels like the more responsible, safe, smart thing to do. And then next year, when we are hiking the Appalachian trail, I won’t have to worry quite so much about the dangerous ways sex hormones can influence coyote and dog behavior.