I just participated in an interesting facebook discussion regarding what IS an animal behaviorist, and who has the right to put that “title” after their name, or even to use that phrase as a descriptive phrase when describing yourself as a dog trainer.

Legally speaking, you can give yourself any title you want, as long as laws do not require special certification or licensing for your title. As far as I understand currently, the term “dog trainer,” just like the term “animal behaviorist” is unlicensed, unregulated descriptive phrase and anyone can described as a dog trainer or animal behaviorist just as we can describe ourselves as herbalists, artists, left or rightists. Anyone can call themselves a “love nugget,” or “doctor of procrastination.” 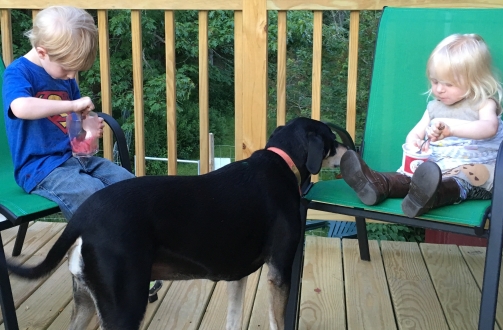 A title is a little bit different. A title becomes part of the way a person is addressed on letterhead, or on a sign by the door.  For example, Joe Schmoe, Animal Behaviorist. Or Jane Smooth, Ph.D.  Or Donald Trump, President. When someone uses a phrase as a title,  we all expect some sort of justification for the title. Maybe an employer or University has awarded the title. There’s been an election. But also a title can also be self-awarded. Think Joe Schmoe, Herbalist, or Mary Contrary, Doctor of Unintended Spider Bites, Betsey Boop, Pet Psychic.

So, titles are a marketing tool. If you aren’t trying to sell something, rule over or influence someone, you don’t need a title.

For human beings, reputations and titles function strongly as reinforcements and punishments. Dogs don’t work hard simply because they want to be called, “Sampson, King of the Yard,” but humans do. I had a friend years ago who had a triangular sign on his front lawn over his name and the word “author.” So there are whole industries  built on the incredible value of  credentials.  There are many that are available.  Some of these programs are really great, some aren’t.  But you don’t need a credential to be many things, and the endless list of of what you could be without a license includes author, artist, cook, animal trainer and animal behaviorist.

A Veterinarian Behaviorist on the other hand is a licensed professional title for a Veterinarian who is versed in prescribing behavioral medications and treatment plans for stressed animals. They will have DVM after their name. That stands for Doctor of Veterinary Medicine and you have to be licensed and graduate with a degree in Veterinary medicine to use that title or to describe yourself as a veterinary behaviorist.

In my business, I title myself “Head Trainer” because I want guests to know that the buck stops with me here.  I also describe myself as an herbalist,  animal behaviorist, performing artist. I have a bachelors degree from a self designed study in Animal Behavior and character development that I completed at Vermont College, but they gave me the initials B.L.A. and I think B.S. is what it should really be called so I don’t bother putting the initials after my name!

Behaviorists use terminology,research and concepts from the field of behavior science as it goes back to Pavlov, B.F.Skinner, Watson and other behaviorists. Here is a brief overview: https://owlcation.com/social-sciences/Cognitive-Development-in-Children-from-Watson-to-Kohlberg

You know you are working with a behaviorist where  instead of “training commands,” you learn how to  “condition a cue.” Instead of discussing your “energy” or “dominance,” or “pack behaviors” or “pack rank,” behaviorists talk about “stimulus and response,” “operant and classical conditioning,” “reinforcements” and “marker signals.”  Instead of “showing the dog who’s boss” by entering a door or eating a meal before a dog,  behaviorists show how the behavior of passing through a doorway is functioning as a reinforcement or punishment of desirable or undesirable doorway behaviors.

Behaviorists, like behaviorism, focus on visible behavior and avoid straying into  Freudian or Jungian style analysis regarding sad childhoods or abused puppyhoods. Behaviorism is about  behavior as it is happening in the present moment. Behaviorists have learned to “see” emotions more as physical behaviors, maybe appearing as a surge of activity, or a depressed affect, or trembling and whining.  Behaviorists focus on behaviors that are  visible and avoid attributing emotions such as jealousy, anger, protectiveness, pride, shame laziness etc on behaviors. But people describe themselves all sorts of ways, and  there is no guarantee that any self-described “dog trainer,”  “pet psychic,” “behaviorist” or “whisperer” is describing their abilities accurately or simply marketing themselves.

As in any field of study,some “behaviorists” might also be economists, pharmacists, ethologists, or have credentials in a related or unrelated field. Some animal behaviorists are specialists in a particular type of behavior (flock, herd, human, pack, economic). But all behaviorists are interested in behavior science, and believe that behavior science has the best data, and researched strategies for understanding and shaping the behavior of any animal.   So, in addition to dog training, animal behaviorists might also be able to help you with your cat, bunny, birds, goats, horse cow and snake (But if it was me, I’d tell you to get rid of the snake!).

Dear fellow dog trainers who are frustrated by those who give themselves some misleading titles, I hear you. I have an issue with people describing themselves Pet Psychics or Dog Psychologists, but even they have the right to do that and you have the right to market your services however you see fit as well. If you haven’t already done so, I invite you to read crack open the goldmine that is behaviorism. Get in the game with reinforcement marker signals,  operant and classical conditioning and matching theory. Empower yourself. Avail yourself of the science. Take classes, learn from the best. Continue to grow. And feel free to describe what you are doing in the most accurate language you’ve got.

One thought on “What is an animal behaviorist?”