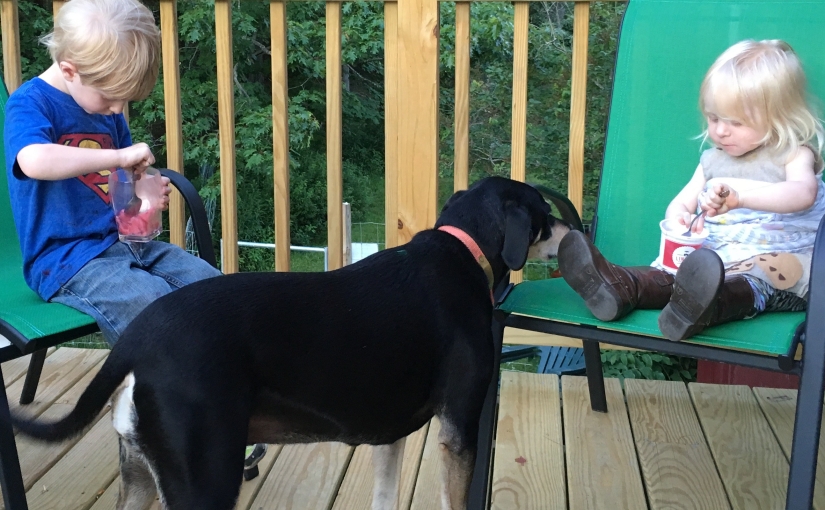 I love the internet’s ability to allow trainers to discuss and share experiences regarding controversial geeky training devices like no reward markers. I tend to defend the use of trained NRM, while also telling trainers, “stop saying no! Stop telling your dog that he’s wrong!”

To explain that, I wanted to tell this story of my almost 4 year old grandson, who is learning to brush his teeth.

He was spending the night, and so I gave him his own special spongebob vibrating toothbrush and stood him in front of a hall mirror to brush his teeth. Weird for him to have a Nana who is also a dog trainer, because  I know I’m helping train my grandson to brush his teeth! And frankly,  he wasn’t doing it perfectly, but there is no way I would ever dream of doing anything but praising his awesome toothbrushing. After I admired the toothbrushing for quite some time and he was done, I recall I did suggest one more round! And it was the kind of toothpaste you’re supposed to swallow, so that part didn’t matter.

We don’t need to criticize puppies, children, partners,  friends or most of all, OURSELVES. It’s empty and unhelpful when we cue disapproval, “wrong,” and turn an interaction sour, with some idea that this is wrong or not good enough, but uncertain, or even no idea, about what to do to make the wrong right.

That’s different than the way I train and use a NRM. We train reward marker signals (RMS) first of course, but animals need to know what the good choices are. Training RMS gives the dog lots of rewarding experiences in the choices you want him or her to make.   Later, when he knows at least one successful behavioral strategy or route to reinforcement, a NRM is paired with those moments when he’s not on the route, or when he is working and made a choice that is not leading to the reinforcement prize. My signal is “Oopsie!” With my dogs, a NRM is information that helps them, realize, “oh not this! It must be that!” and find the prize. It contains information my dogs want to know!  If you were accidentally headed the wrong way down a one-way street, and I hollered, “You’re going the wrong way!” You’d appreciate the information.  And you’d have a good idea about what you need to do to get back on the path. If you were looking for your wallet and I said, “It’s not on this table,” you would appreciate the information. That’s how we train and use the NRM at Whole Dog Camp, in games that could help your dog actually find that wallet.

author, sailor, animal trainer,rally, agility and freestyle competitor, owner/proprietor Whole Dog Camp, now located in Freeport, Maine. For 31 years we lived on Peaks Island Maine. Now we are sailing with our 2 dogs in the Bahamas, and will return to Maine in 2017 View all posts by Jenny Ruth Yasi